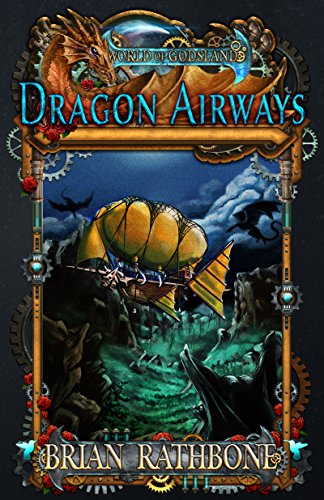 Let Dragon Airways take you on a thrill-ride to a new and exciting world with dragons & mythical creatures.
When a boy who can sense ancient magic becomes valuable to both sides of the war, enemies close in. Fleeing those sent to capture him, Emmet and his sister Riette board Dragon Airways. Not knowing friend from foe, they must rely on even those who might betray them. In a thrilling journey spanning land and sea, brother and sister come to know the true measure of Emmet’s abilities along with the real value of love, friendship, and sacrifice.

While this fantasy adventure is a distant prequel to The World of Godsland Epic Fantasy Series, and a great place to start the series, it can also stand alone.

Known for his terrible dragon jokes on Twitter, Brian Rathbone brought some of that same brand of humor to an otherwise serious fantasy adventure with magic, gods & goddesses, and intrigue. Rathbone’s experience as a professional horse trainer also comes into play as he explores relationships with creatures with whom you can’t fully communicate and whose desires only sometimes align with their companions. A love of reading the best epic fantasy books as a young man inspired Brian to write the kinds of for boys and for girls that he liked reading in his young adult years. Getting older never dampened Rathbone’s enthusiasm for a good epic fantasy adventure, and his books are widely enjoyed by readers young, old, and those somewhere in between.

In the two other prequels to The World of Godsland Epic Fantasy Series, Brian Rathbone teamed up with writers Jack McCarthy and Morgen Rich to flesh out story lines that were not fully told in the main series. The collaboration between these writers resulted in three new entry points into Godsland ranging from dark fantasy to fantasy romance and contemporary steampunk adventure with dragons and other monsters.

Ascension focuses on the story of Gwendolin and her journey from simple farm girl to the leader of a powerful order of monks and druids. Along her metaphysical journey, she learns a great deal about her world and herself–some magic must come from within.

Onin explores the history of Onin of the Old Guard and and his dragon, Jehregard. In a world where dragons are bred for size, Onin finds himself standing in opposition to thousands of years of dogma and tradition, as he fights for the life of a dragon no one else would save. There is something different about this dragon–something special. Bearing a “watch eye”, like that of a prized horse, Jehregard does everything he can to prove Onin both right and wrong.

Dragon Airways explores a time when magic is a thing of the distant past and technology has come to dominance in its place. In a steampunk, dieselpunk, dragonpunk twist, Dragon Airways shows what happens when a group of misfits put their mind to something. The feral dragons and those who seek to dominate them, have other plans. Airplanes, airships, and battle balloons are no match for dragons and magic, and Emmet knows just how to solve the mystery of where to find them.

These books are suitable for fans of epic fantasy, young adult epic fantasy, steampunk, and paranormal adventures. While the content appeals to older readers, its kept clean to make it accessible to younger readers as well.

For early readers and young children, Brian Rathbone and his friends have produced a number of dragon books for kids for those who like fantasy, magic, and of course, dragons. These include The Silliest Dragon, Grumpy Dragons, and The Lost Dragons.