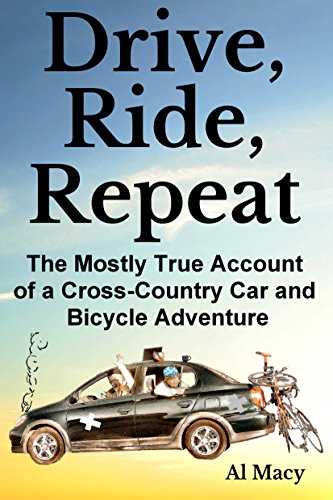 Author Al Macy is a character and a tightwad with a unique sense of humor. He and his wife squirreled away enough money to retire early, do interesting things, and take unusual trips. As he puts it:

“Every day I wake up with nothing to do, and by the end of the day, I’ve only gotten half of it done.”

The book is a journal of a car/bicycle/camping trip from California to St. Louis and back, but Macy promises that “if it starts sounding like one of your brother-in-law’s boring slide shows, I will stop this book, and we’ll turn around and go home. I mean it.”

Interspersed with the journal chapters, you’ll find thought-provoking life tips, stories from the past, and descriptions of Al’s wacky inventions. You’ll hear poignant anecdotes about what happened when doctors discovered a golf-ball-sized tumor in his wife’s brain and how everything they owned burned.

Here’s an example of one of those chapters:

Chapter 47 – Puking in a Thunderstorm

In 1982, Lena and I were visiting her folks in Sweden, and we went on a ryggsäcksfotvandringtur. To speak Swedish, all you do is take a bunch of English words, screw around with them, and squeeze them together. For example, in the big word in the last sentence, the only real foreign part is “rygg” which refers to one’s back. Other than that it’s just “Back – sack – foot – wandering – tour,” meaning “wandering around on foot with a pack on your back,” or “backpacking.”

Apparently we have 1,019,729.6 words in English (.6 really?). In Swedish, the total depends on how you count them. Is “ryggsäcksfotvandringtur” one word, or just five words stuck together? Most Swedish dictionaries have around a half-million entries, but if you count words that are Velcroed together, it has many more.

Speaking of Velcro, it was discovered when Georges de Mestral went for a fotvandringstur, and noticed the burrs that stuck to his pants. The word “Velcro” was added to our dictionary in the year nineteen something-or-other. I’ve learned that the phrase “Velcro forehead” refers to the overly dramatic gesture of tilting your head back and holding the back of your wrist against your forehead (”Oh, woe is me!”). Can you tell that I’m worried that this chapter is too short, and I am desperately looking for stuff to add?

So anyway, where was I? Oh, yeah, Lena and I were on a short backpacking trip in the mountains of sweden. On our route to the more desolate sections, we passed houses that had sod growing on the roof. And when I say sod, I don’t mean the neat, well-mowed stuff you buy at the nursery. I mean long messy grass, other small plants, cuckoo birds, and gophers. And these weren’t museum displays put up for tourists, people were really living in these things. It’s where we get the saying “People who live in sod houses should throw stones, but no stones from the roof, please.”

This was a great place to foot wander, but when we were the farthest from the car, Lena got sick (really sick), and both Lena and the heavens opened up at the same time. It gave me a case of Velcro forehead, and my main memory of that trip is of continually taking tiny plastic snack bags of vomit out and dumping them in the streams of water surrounding the tent.
Luckily Lena’s Scandinavian constitution won out over the bugs, and the next morning she was all better and ready to drag me home, out of the wilderness. So, we had a general good time despite the puking adventure.

If that kind of humor appeals to you, you need to buy this book. And if you’re still on the fence, please use the Look Inside feature or download a free sample to your Kindle.