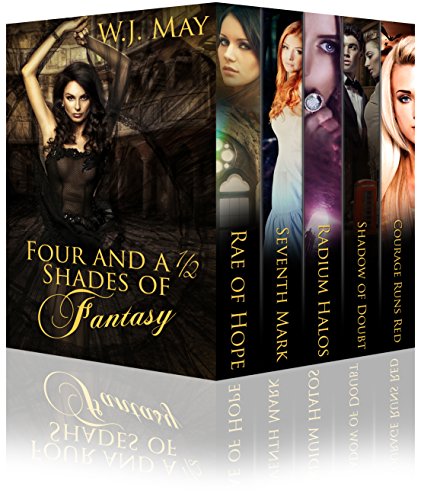 From USA Today bestselling author W.J. May, comes a boxset of first books in her international bestselling series!

“One day, you will be old enough to start reading fairytales…”

RAE OF HOPE – THE CHRONICLES OF KERRIGAN

How hard do you have to shake the family tree to find the truth about the past?

Fifteen year-old Rae Kerrigan never really knew her family’s history. Her mother and father died when she was young and it is only when she accepts a scholarship to the prestigious Guilder Boarding School in England that a mysterious family secret is revealed.

As Rae struggles with new friends, a new school and a star-struck forbidden love, she must also face the ultimate challenge: receive a tattoo on her sixteenth birthday with specific powers that may bind her to an unspeakable darkness. It’s up to Rae to undo the dark evil in her family’s past and have a ray of hope for her future.

Like most teenagers, Rouge is trying to figure out who she is and what she wants to be. Everything changes when she befriends a strangely intoxicating family. Siblings Grace and Michael, appear to have secrets which seem connected to Rouge. Her hunch is confirmed when a horrible incident occurs at an outdoor party. Rouge may be the only one who can find the answer.

An ancient journal, a Sioghra necklace and a special mark force life-altering decisions for a girl who grew up unprepared to fight for her life or others.

When the king is murdered, his only daughter, Katerina, must flee for her life. She finds herself on a strange and dangerous path. Alone for the first time she’s forced to rely on her wits and the kindness of strangers, while protecting her secret at the same time.

Because she alone knows the truth. It was her brother who killed the king. And he’s coming for her next.

With her brother’s hired assassins closing in at every turn, Katerina must unlock a secret that’s hidden deep inside her. It’s the only thing strong enough to keep the darkness at bay.

Can she find the answers she needs? Will she ever take her rightful place on the throne?

Only one thing is certain…she’s running out of time.

Everyone needs to be a hero at one point in their life.

The small town of Elliot Lake will never be the same again. Caught in a sudden thunderstorm, Zoe, a high school senior from Elliot Lake, and five of her friends take shelter in an abandoned uranium mine. Over the next few days, Zoe’s hearing sharpens drastically, beyond what any normal human being can detect. All four develop similar traits. Their senses develop into stronger, supernatural powers.

Fashioning themselves into superheroes, the group tries to stop the strange occurrences happening in their little town. Muggings, break-ins, disappearances, and murder begin to hit too close to home. It leads the team to think someone knows about their secret – someone who wants them all dead.

An incredulous group of heroes. A traitor in their midst. Some dreams are written in blood.

What if courage was your only option?

When a raging blood feud between vampire & shifter spills into her home, Kallie is caught in the middle. Torn between love and family loyalty she must find the courage to fight, even if it means risking her own life in the process.