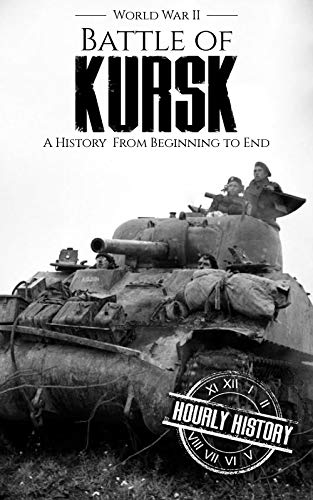 Long-time adversaries Germany and the Soviet Union put their hostilities to the test in World War II. Despite a temporary truce in the signing of the Molotov-Ribbentrop Non-aggression Pact in 1939, the Germans and the Soviets knew that the time was coming when they would face one another on the battlefield. Adolf Hitler, eager to accomplish his confident prediction that Russia would be easily defeated and its people subjected into slavery to serve as free labor for Germany, invaded the vast country in June 1941. But Operation Barbarossa was the beginning of the downfall of the Third Reich, as the dogged Russian refusal to succumb and the menace of the Russian winter demonstrated that the Soviet Union would not surrender as other European nations had done.

Inside you will read about…

✓ Hitler’s View of the Untermensch
✓ The Communazi Pact and Operation Barbarossa
✓ The German Panzers
✓ The Soviet T-34
✓ Preparing for Battle
✓ Showdown at Kursk
And much more!

By the end of the Battle of Kursk in August 1943, the largest tank battle in history, Germany had learned that the Soviet war machine was not easily dismissed. The Russians had learned that the Nazis were not invincible. In a fierce military encounter that included more than three million soldiers, ten thousand tanks, and five thousand aircraft, the Battle of Kursk demonstrated the folly of underestimating the might of the Red Army.