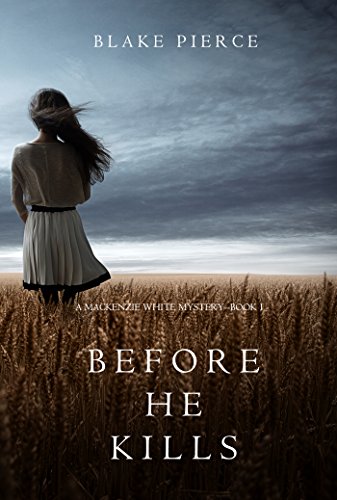 Book #1 in the bestselling Blake Pierce mystery/thriller series, with over 400 five star reviews!

In the cornfields of Nebraska a woman is found murdered, strung up on a pole, the victim of a deranged killer. It doesn’t take long for the police to realize a serial killer is on the loose—and that his spree has just begun.

Detective Mackenzie White, young, tough, smarter than the aging, chauvinistic men on her local force, finds herself called in grudgingly to help solve it. As much as the other officers hate to admit it, they need her young, brilliant mind, which has already helped crack cold cases that had left them stumped. Yet even for Mackenzie this new case proves an impossible riddle, something the likes of which she—and the local force—have ever seen.

With the FBI called in, together, an intense manhunt ensues. Mackenzie, reeling from her own dark past, her failed relationships, and her undeniable attraction to the new FBI agent, finds herself battling her own demons as her hunt for the killer takes her to the darkest places of her mind. As she delves into the killer’s mind, obsessing over his twisted psychology, she finds that evil truly does exist. She only hopes it will not be too late to extricate herself from it, as her entire life collapses around her.

As more bodies turn up dead and a frantic race against time ensues, there is no way out but to find him before he kills again.

A dark psychological thriller with heart-pounding suspense, BEFORE HE KILLS marks the debut of a riveting new series—and a beloved new character—that will leave you turning pages late into the night.

Also available by Blake Pierce is ONCE GONE (A Riley Paige mystery—Book #1), a #1 bestseller with over 1,000 five star reviews on Amazon—and a free download!

Read what people are saying about Blake Pierce’s novels

“A dynamic story line that grips from the first chapter and doesn’t let go.”
–Midwest Book Review, Diane Donovan (regarding Once Gone)

“A masterpiece of thriller and mystery! The author did a magnificent job developing characters with a psychological side that is so well described that we feel inside their minds, follow their fears and cheer for their success. The plot is very intelligent and will keep you entertained throughout the book. Full of twists, this book will keep you awake until the turn of the last page.”
–Books and Movie Reviews, Roberto Mattos (re Once Gone)