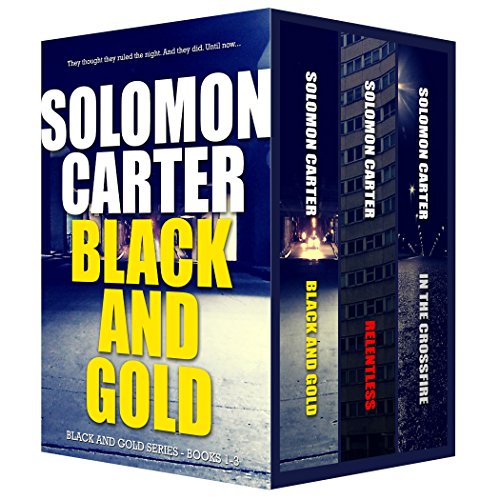 A ruthless youth gang terrorises a local estate. The gang are brutal and unchallenged. They rule through absolute fear. But tonight they take a step too far… Tonight a stranger is watching. A man who has had enough.

But the gang is not alone… and though he does not know it, neither is the he…

BLACK AND GOLD 1
In a ghetto occupied by a ruthlessly violent youth gang, one man is ready to stand up for the silent majority, ready to do whatever it takes to claim back the night. One man… One mask… with enough righteous anger to bring the world crashing down upon their heads.

RELENTLESS, BLACK AND GOLD 2
The looming tower blocks of the Kingsmere Estate  are home to every kind of menace. It’s a place many fear to tread. Early one morning a man on a mission comes knocking. And he isn’t going away until he gets what he wants.

Dark forces stand in his way. Organized crime and deadly criminals are intent on his demise. And must get out of the area quickly before daylight or risk capture by the police.
But when Simon sees another incident unfolding he can’t help but get involved. But Simon soon wonders whether if it’s a case of one job too many…

IN THE CROSSFIRE, BLACK & GOLD 3

As rumours circulate of a dangerous protection racket blackmailing the small businesses of the town, the ever impetuous Jess takes bold risks to play amateur sleuth and starts combat training in a bid to become Simon’s equal.

There is a ruthlessly violent new team in town.  Is Jess playing with fire at the worst possible time?
Life for the vigilante is getting complicated and more dangerous by the day. From hunter to hunted, from cold blooded animal to discovering unwelcome emotions is the Man in the Mask losing his way when he needs to be at his clinical best?

And when the streets are filled with blood and broken glass, the vigilante and his persistent companion may face their greatest tests yet.

In the heat of battle anything can happen…