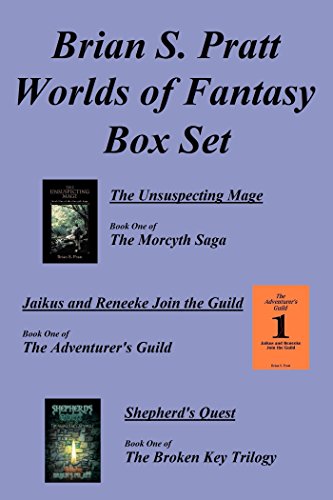 This Box Set includes the first complete book of each of Brian S. Pratt’s most popular Fantasy Worlds:

The Unsuspecting Mage of The Morcyth Saga

Sounds great for a veteran role-player. When on-the-job training entails battling demons, learning magic through trial and error, and living in a world without toilet paper, things could get rough. But to be dropped in the middle of a forest and having to do it on your own with no instruction…welcome to James’ world.

It all gets started when his grandfather suggests to James, a young man on the verge of graduating high school, that he check out the following advertisement for a job.

“Magic! Real Magic! Ever wanted to learn? We require someone with intelligence and a disciplined mind. Those well versed in fantasy novels and role playing games a plus. May need to travel.”

Sounded like the perfect job for a veteran role-player and avid fantasy reader. James had no idea he’d be whisked to another world, completely cut off from friends and family. Arriving in a meadow in the middle of a forest, he’s greeted by a creature not entirely human. He was then told three things:

Then the creature vanished.

Which way was Trendle? Where was he? What might inhabit the forest that will seek his ruination? These were but a few of the questions needing to be unraveled.

Alone with only his wits and knowledge gleaned from hundreds of books and dungeon campaigns, he started out just trying to survive. He soon learned that one mistake, one lapse in judgment could mean his death.

Not long after arriving, he made the acquaintance of Miko, a street-wise kid who quickly became his friend and companion. Little did he know that the strength within this child from the streets of Bearn, a strength that would be tested again and again as they waded through battle after battle, delved in hidden passages deep beneath the earth, and faced off against an the might of an Empire, would be invaluable in the trials ahead.

The Unsuspecting Mage is the first book of The Morcyth Saga, a seven book epic fantasy adventure. It follows James as he seeks first to master the art of magic then to uncover the reason why he had been brought to this strange new world where armies are on the move and gods meddle in the affairs of men.

Longing for adventure is one thing, but when it becomes reality…

Four comrades set out to recover the segments of a key which they believe will unlock the King’s Hoard, rumored to hold great wealth. Written in the style of an RPG game, with spells, scrolls, potions, Guilds, and dungeon exploration fraught with traps and other dangers.

Jaikus and Reneeke Join the Guild of The Adventurer’s Guild

They quickly realize that doing such may be harder than anticipated. Tagging along with a seasoned Group of Adventurers as “Springers” they set out only to later learn that Springers-Spring the trap!