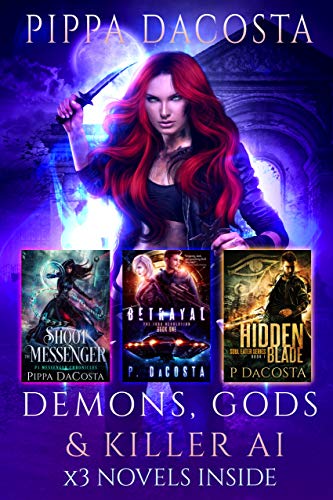 Accused of murder, illegal messenger, Kesh Lasota, is caught in a war between technology and the ancient, mythical fae.

Mind-blowing twist and turns in this international bestselling fae-in-space series.

She is programmed to kill.
He’ll do anything to survive.

Ex-con Captain Caleb Shepperd believes being good is overrated. All he wants is to smuggle illegal cargo through the nine systems and live a prosperous (likely short) life on the wrong side of the law.

But there’s a problem with that plan. The priceless synthetic stowaway on his ship is a distraction he doesn’t need.

Torn between selling her and tossing her out the airlock, Shepperd fails to realize the synth is a killer, and he’s the one locked in her sights.

In a world where only one thousand synthetics were built, synthetic number One Thousand and One should not exist. She is no ordinary synth. Memories locked inside her code could bring Shepperd—and the entire nine systems—to its knees.

Captain Shepperd and the oppressive corporations are about to learn that you can’t hide from the sins of your past, especially when that past has orders to kill.

“They call me devil, liar, thief. In whispers, they call me Soul Eater. They’re right. I’m all those things—and more.”

Kicked out of the underworld and cursed to walk this earth for all eternity, Ace Dante finds solace in helping others avoid the wrath of the gods.

But when warrior-bitch, Queen of Cats, and Ace’s ex-wife, Bastet, hires him to stop whoever is slaughtering her blessed women, Ace is caught between two of the most powerful deities to have ever existed: Isis and Osiris.

And Ace is in their way.

Welcome to a New York where the ancient gods roam.

Dive into these gritty, all-action, best-selling urban fantasy and science fiction novels at your own risk!

“There is just something about Pippa’s writing whether it’s her smartass enticing characters or her gut-squeezing action scenes that keep you on the edge of your seats.”

“This series, this body of work, is storytelling at its best.”

“You are gonna feel at home with her Ilona Andrews tone. Urban fantasy dressed in Sci-Fi.”

“This world is dark, the characters are twisted and I was completely hooked.”