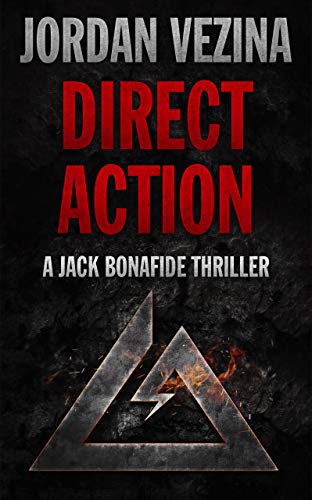 Jack Bonafide thought that being a founding member of Delta Force would be the most important thing he ever did.

He was dead wrong.

After leading a daring mission into the heart of Iraq Jack is recruited by CIA Assistant Director Mike Tresham to work as one of his Ghost Operatives, but Jack is about to get more than he bargained for.

A monster hydrogen bomb is on the loose in the United States.

Two rival KGB factions are on the hunt for it.

Jack Bonafide is caught in the middle.

Direct Action is an edge of your seat thriller set in 1980 that will have you reading all the way through in one sitting.

What Amazon Readers Are Saying:

★★★★★ “An edge of your seat pre-quel to what promises to be more Bonafide adventures! Kick butt adventure complete with ouch did not see that coming!” -Molly Hamblin

★★★★★ “Between all the Jericho Black, Jakob Mitzak, and Jack Bonafide books there is such excitement, mystery and intrigue to keep one entertained for a long time. Direct Action is no exception. While it’s a novella it is still packed with the trademark style that is Jordan Vezina. Exciting and fast paced” -Ralph 2

★★★★★ “Jack Bonafide looks like the real deal. Ex-Delta soldier, now black CIA operative, trying to prevent Russians from assembling and detonating a huge nuclear weapon in the US.” -Amazon Reader

★★★★★ “Wow what can I say another five star book from this author I really enjoyed reading it and would definitely recommend to other readers.” -Susan Burns

Connect With Me On Social Media: