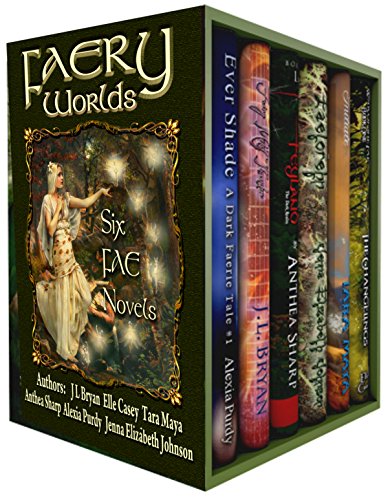 *Over 85,000 copies sold worldwide!* A stunning collection featuring the first books in six different fan-favorite series by bestselling, award-winning fantasy authors! Discover the many worlds of Faerie in these novels filled with adventure, love, and – of course – Fae Magic.
(Best for readers 14 and up) Cover by Howard David Johnson

THE UNFINISHED SONG (Book One): INITIATE – TARA MAYA
Dindi longs to become a Tavaedi, one of the powerful warrior-dancers who secret magics are revealed only to those who pass a mysterious Initiation. The problem? No-one in Dindi’s clan has ever passed the Test. But Dindi has a plan.

WAR OF THE FAE: BOOK 1 (THE CHANGELINGS) – ELLE CASEY
Jayne Sparks, a potty-mouthed, rebellious seventeen-year-old, and her best friend, shy and bookish Tony Green, have a typical high school existence – until, along with a group of runaway teens, they are hijacked and sent into a forest where nothing is as it seems. Who will emerge triumphant? And what will they be when they do?

FAIRY METAL THUNDER – JL BRYAN
A teenage garage band steals instruments from the fairy world and begins enchanting crowds, but their shortcut to success soon turns them into enemies of the treacherous Queen Mab.

FEYLAND: THE DARK REALM – ANTHEA SHARP
Faeries. Computer games. When realms collide, a hero from the wrong side of the tracks and the rich girl he’s afraid to love must risk everything to defeat the dangerous fey.
What if a high-tech computer game was a gateway to the perilous Realm of Faerie…

FAELOREHN – JENNA ELIZABETH JOHNSON
Meghan has been strange her entire life: her eyes change color and she sees and hears things no one else can. When the visions get worse, she is convinced she has finally gone crazy. That is, until the mysterious Cade shows up with an explanation of his own.

EVER SHADE (A DARK FAERIE TALE #1) – ALEXIA PURDY
A dark twist on faeries. For Shade, a chance meeting with a powerful Teleen Faery warrior who wields electrical currents and blue fires along his skin, has her joining him on a treacherous mission for the good Seelie Faerie Court across the land of Faerie. Magic and malice abound and nothing is what it appears to be.