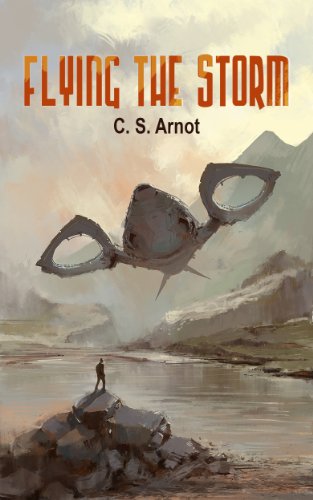 “It’s only bravery if there’s a chance you’ll lose.”

The Gilgamesh: a colossal airborne warship and relic of the Thirty-Year War. Once the glorious flagship of the North Atlantic Union, it has become a hive of renegades and pirates, unchallenged in the skies over Eurasia. Like an angry god, it dominates wherever and whomever it chooses.

Now it has chosen the Crimean Peninsula, the most lucrative trade hub on the Black Sea.

In Sevastopol, two Gilgamesh marines are dead, and in seconds the merchant airman Aiden has become a wanted man. It doesn’t matter that it was his pilot, Fredrick, who got them into the fight in the first place – Aiden finished it. Now they must run, taking their aircraft deep into the Caucasus Mountains to evade capture and execution.

Through dogfights, shootouts and cock-ups the pair must make their escape, hounded by bounty hunters and slavers, driven to discover a secret that might – just might – change the balance of power forever…

Flying the Storm is the debut novel from Scottish author C. S. Arnot. To follow the author, go to: