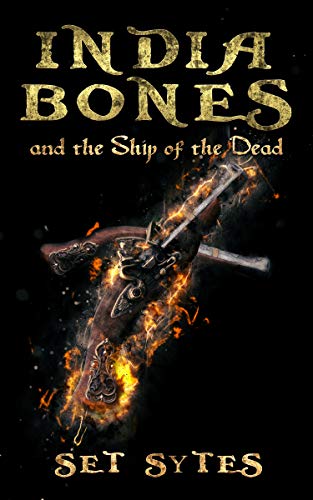 The smoking black line rolled forward, taking over the sea and the sky in its approach. Fog stole onto the shore, and soon most of the beach was invisible. And out of the fog there came a long, slow, horn, and as it cut short there came the unmistakable creaking of ship masts.
The mist rolled back, as though someone were sweeping it away with a broom. The blackness dissipated, and the beach lay clear and dark gold before them. Anchored in the bay was a grey and white ship, and pulling up to the shoreline were three boats full of the dead.

A street kid grown up parentless on Mexico Island suddenly finds himself amongst a crew of skeletons on the legendary Ship of the Dead. Eager for adventure, he sails the Caribbean, searching for pirate treasure and the father he’s never met, all the while making friends . . . and bitter enemies.

INDIA BONES AND THE SHIP OF THE DEAD is the first book in a thrilling new pirate fantasy series, featuring the adventurous exploits of the young India Bones in an exotic yet dangerous world as different from our own as it is similar.