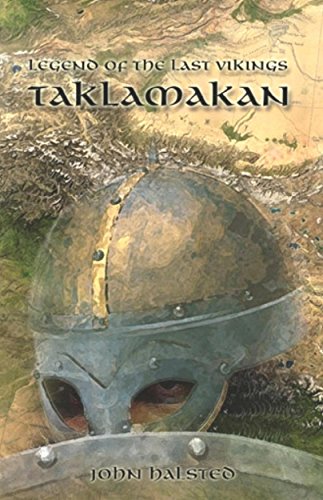 In 1066 upon the death of Edward the Confessor, Harald Hadraada, King of Norway challenged for the crown of England, claiming it was his through his bloodline. He led a large force of over 400 longships to England and after a few initial victories was defeated during the Battle of Stamford Bridge, near York, by Harold Goodwinson. Only 24 longships returned to Norway.
Two weeks later Harold Goodwinson and his army, exhausted by the forced-march from York to Hastings, were defeated William the Conqueror. And the rest they say is history. Or is it?

Questions remain. What happened to the Vikings after Stamford Bridge? Where did they go? What did they do?
Well Legend of the Last Vikings is just one possibility…………..

But why an Alternate Ending?
When I started researching the book, I was amazed to discover that the Silk Route was not just one route, but instead a whole network of routes reaching from Eastern Europe and criss-crossing Asia. As such I had to decide which of these routes my characters would travel along. Before I could make this decision I had to research the routes. In doing so I found so much fascinating information on each, trying to decide which route to “travel” was not easy. Even though I eventually settled upon a route, I did not want to waste potential stories so decided to write an alternate ending which in effect gives the reader a two-for-one.

Synopsis Chapters 1 – 33
I was going to give a summary of the chapters 1 to 33 but have decided that too much action, adventure, character building and meaning would be lost in doing so, so I have kept this to a minimum by providing the following synopsis.

On returning home to Norway after defeat at Stamford Bridge in 1066AD, our hero, Ulf Uspakson, herald to King Harald Hadraada, realises an era is over. Then he remembers the story of a Swedish Viking Adventurer, Yngvar Vittfarne (Yngvar the Far Travelled), who went missing on a journey to the East and in a last fling of youth decides to try and trace him – somewhere on the Silk Route. No easy task!

The alternate ending starts at Chapter 34 with the conclusion of the adventure in China’s Taklamakan desert – or is it?
After leaving Shanguo and crossing the Tien Shan mountains, the crew, as I affectionately call this motley group, follow the course of the Jaxartes River (Syr Darya) to the Aral Sea in Kazakhstan. They then cross the Karakum and Barsuki deserts, they loop around the top of the Aral sea. Approaching Astrakhan from the North East, they are tired and weary after such an arduous journey. As always trouble awaits and the crew will have to summon physical and mental strength from reserves hidden deep within themselves.

About the Book
A finalist in the Foreword Magazine Book of the Year Competition. It has a 4 Star Amazon rating and reviews of the book can be found on the Amazon page as well.