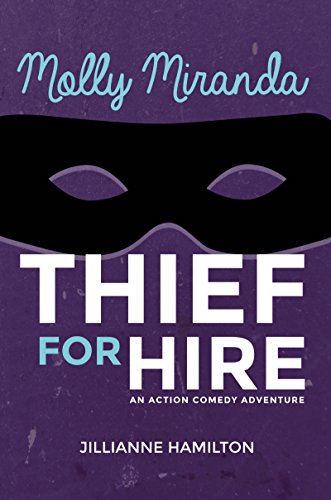 Shortlisted for the 2016 Prince Edward Island Book Award for fiction.

Join Molly on her hilarious adventures as she dodges bullets, trespasses, wears disguises, and steals her way into trouble.

Professional, experienced contract burglar.
It’s not exactly something you can put on a business card.

Molly Miranda has made a successful living from “acquiring” valuables and delivering them to clients who pay buckets of cash for her unique services.

So what if she has to lie about her lavish lifestyle in Manhattan and her frequent trips out of the country? Molly has everything under control.

Things go astray when she knocks boots with her charming roommate right before taking off to Scotland with an untrustworthy wildcard on a job assignment that doesn’t go quite as planned.

It doesn’t help that this new partner-in-crime is super annoying. And attractive…

Perfect for fans of Janet Evanovich’s Stephanie Plum series or comedies by Meg Cabot. Recently reached #3 in Women’s Adventure and #4 in Humor & Satire (American) on Amazon!

“How much fun is this? I’m loving the debut from Hamilton—now I need more about her sassy, sometimes awkward and always brave heroine, Molly Miranda. Stealing other people’s stuff has never been so charming. Bravo!”
– Patti Larsen, award-winning author of the Hayle Coven series

“It’s tense and smart-alecky. It’s likeable without being sweet. It’s sexy and tough, and as apt to kick you in the pants as to kiss you on the cheek.”
– Award-winning author Leo McKay Jr.

“Molly Miranda is a fun read with some good messages of self awareness and identity laced through the humour and suspense.”
– Author Natalie Corbett Sampson

Tell us about Molly Miranda. What makes her tick?
Molly Miranda is in her early twenties and has a pretty average life- except for the fact that she makes her living by stealing big ticket items like art, jewelry and the odd historical artifact. She doesn’t really consider herself good at anything else and gets twitchy when she’s not out on assignment. She feels safest when she’s just acquired a hefty amount of cash as money equals stability. For Molly, financial security equals happiness.

Have you always been interested in thieves in fiction? If not, why now?
Not specifically. I knew I wanted to make Molly a criminal. I initially considered making her a hired assassin but thought it might be easier to make her a likeable character if her crime didn’t physically hurt anyone so I made her a burglar who steals items from people who can afford to have things stolen from them. Plus, my book is a comedy. Much easier to make a book funny and light-hearted if nobody is being murdered. Once I decided to make her a thief, I did some research and became fascinated. Obsessed, even. I think I could pull of a decent heist if the opportunity ever came up.

What sort of research went into Thief For Hire?
I basically inhaled Confessions of a Master Jewel Thief by Bill Mason. Such a fantastic read. Unbelievable. I also read Catch Me If You Can by Frank Abagnale, The Rescue Artist by Edward Dolnick, The Thefts of the Mona Lisa by Noah Charney (Charney is a fantastic wealth of art theft information) and The Gardner Heist by Ulrich Boser. I’ve also watched a lot of documentaries on art forgeries, art thefts and famous thieves like Bonnie and Clyde.