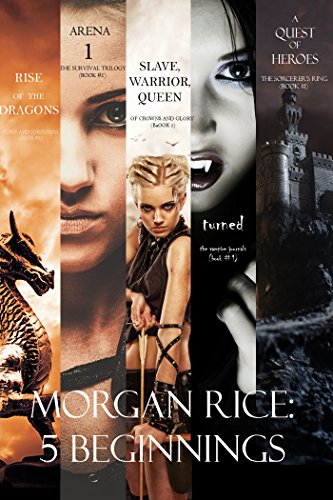 This 5 book bundle includes book #1 in each of Morgan Rice’s five #1 Bestselling series—THE VAMPIRE JOURNALS, THE SURVIVAL TRILOGY, THE SORCERER’S RING, KINGS AND SORCERERS, and OF CROWNS AND GLORY—five novels all here in one convenient place! Whether you are interested in vampires, dystopian fiction or fantasy, this bundle offers a great introduction to the Morgan Rice universe. Five bestselling novels with over 300,000 words of reading!

In Turned (BOOK #1 IN THE VAMPIRE JOURNALS),18 year old Caitlin Paine is uprooted and forced to attend a dangerous NYC high school, where she begins to change, overcome by a superhuman strength. She needs to find out who she really is, who her real father was. She is helped by Caleb, a mysterious and powerful vampire, and they are in peril as a forbidden love arises–a love between races that will force them to risk it all for each other…

“TURNED is a book to rival TWILIGHT and THE VAMPIRE DIARIES, and one that will have you wanting to keep reading until the very last page! If you are into adventure, love and vampires this book is the one for you!”
–vampirebooksite.com

In ARENA ONE (BOOK #1 OF THE SURVIVAL TRILOGY), a post-apocalyptic, action-packed thriller, 17 year old Brooke, a survivor of the Great War, has her life change when her sister is kidnapped by the slaverunners. She must chase them into the city that was once New York, try to rescue her sister, and fight to the death in Arena One, the death stadium where there is only one rule: no one survives. Ever.

“ARENA ONE was one of those books that you read late into the night until your eyes start to cross because you don’t want to put it down….I would highly recommend ARENA ONE. “
–Dallas Examiner

In A QUEST OF HEROES (BOOK #1 OF THE SORCERER’S RING), Thorgrin, a special 14 year old boy, the least loved of his father, learns he has powers he does not understand. An outsider, he must fight for acceptance as he strives to become a warrior, to join the King’s Legion, and as he falls in love with the king’s 16 year old daughter. Most of all, he must learn who he really is, and why his destiny is so important.

“THE SORCERER’S RING has all the ingredients for an instant success: plots, counterplots, mystery, valiant knights, and blossoming relationships replete with broken hearts, deception and betrayal. It will keep you entertained for hours, and will satisfy all ages. Recommended for the permanent library of all fantasy readers.”
–Books and Movie Reviews, Roberto Mattos

RISE OF THE DRAGONS (KINGS AND SORCERERS–BOOK 1) tells the epic coming of age story of Kyra, 15, who dreams of becoming a famed warrior, like her father, though she is the only girl in a fort of boys. She struggles to understand her special skills and mysterious inner power, and comes to realize she is different than the others. But a secret is being kept from her about her birth and the prophecy surrounding her, leaving her only to wonder. When Kyra comes of age and her father tries to wed her off, she refuses and journeys out on her own, into a dangerous wood, where she encounters a wounded dragon—and ignites a series of events that will change the kingdom forever.

In SLAVE, WARRIOR, QUEEN (OF CROWNS AND GLORY–BOOK 1), 17 year old Ceres, a beautiful, poor girl in the Empire city of Delos, lives the harsh and unforgiving life of a commoner. By day she delivers her father’s forged weapons to the palace training grounds, and by night she secretly trains with them, yearning to be a warrior in a land where girls are forbidden to fight. With her pending sale to slavehood, she is desperate.18 year old Prince Thanos despises everything his royal family stands for. He abhors their harsh treatment of the masses, especially the brutal competition—The Killings—that lies at the heart of the city. He yearns to break free from the restraints of his upbringing, yet he, a fine warrior, sees no way out.