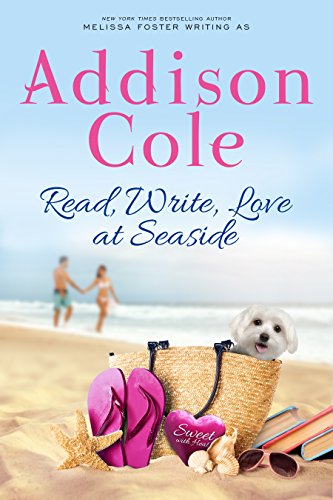 Discover the magic of Addison Cole’s rich and romantic storytelling. Sweet with Heat: Seaside Summers features a group of fun, flirty, and emotional friends who gather each summer at their Cape Cod cottages. They’re sassy, flawed, and so easy to relate to, you’ll be begging to enter their circle of friends!

Read, Write, Love at Seaside by Addison Cole is a Sweet with Heat novel and conveys all of the passion you’d expect to find between two people in love without any graphic scenes or harsh language. If you’re looking for a spicier romance, pick up the steamy edition, Read, Write, Love, written by New York Times bestselling author Melissa Foster. Addison Cole is Melissa’s sweet-romance pen name.

In READ, WRITE, LOVE at SEASIDE…
Bestselling author Kurt Remington lives to write. He spends twelve hours a day in front of his computer, rarely leaving the seclusion of his beach-front property, where he’s come to finish his latest thriller — that is, until free-spirited Leanna Bray nearly drowns in the ocean trying to save her dog. Kurt’s best-laid plans are shot to hell when he comes to their rescue. Kurt’s as irritated as he is intrigued by the sexy, hot mess of a woman who lives life on a whim, forgets everything, and doesn’t even know the definition of the word organized.

Leanna’s come to the Cape hoping to find a fulfilling career in the jam-making business, and until she figures out her own life, a man is not on the menu. But Leanna can’t get the six-two, deliciously muscled and tragically neat Kurt out of her mind. She tells herself she’s just stopping by to say thank you, but the heart-warming afternoon sparks an emotional and unexpectedly sweet ride as Kurt and Leanna test the powers of Chemistry 101: Opposites Attract.

Addison Cole is the sweet alter ego of New York Times and USA Today bestselling and award-winning author Melissa Foster. She writes humorous and emotional sweet contemporary romance. Her books do not include explicit sex scenes or harsh language. Addison spends her summers on Cape Cod, where she dreams up wonderful love stories in her house overlooking Cape Cod Bay.

Addison enjoys discussing her books with book clubs and reader groups and welcomes an invitation to your event.