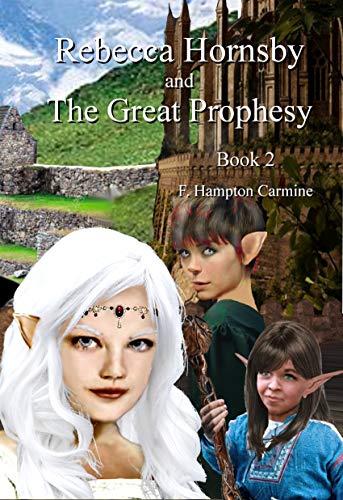 Rebecca Hornsby had completed a great seventh grade year, during which she discovered that she was actually an Elf hidden in the human world for her own safety. She decides to visit the Elven Realm and take on the role of her Elven identity, Princess Azeelia, for the summer. Little does she realize that the hate and distrust between the Elves of the Light and Elves of the Dark is so powerful, or that the prophesy she represents is so despised by both sides.

Her summer visit in the magic Realm begins with Elf school where she tries to catch up on all things Elven but it quickly progresses to real, life and death battles with lasting consequences. Azeelia also learns that the prophesy has been misinterpreted and she is not alone in the prophesy. There are actually three Elves that make up the Tool of Prophesy destined to stop the millennia old feud between the Elven factions before it destroys the entire realm.

She meets Aurora, an Elf her age with an attitude, and they become friends just before the Gargoyles, the magical Realm’s protectors and monitors, take them both to their country for special training. There, Azeelia and Aurora finally meet Cellairia, an Elf of the Dark, who is the last third of the tool of prophesy. Cellairia’s and Aurora’s parents had both been killed by the others relatives when they had been three years old, and they had both been raised by the Gargoyles ever since and trained for their roles in the prophesy. But they had never met and an initial level of distrust is evident in their attitudes.

However, they must develop a deep, unshakable sense of sisterhood to be able to mesh their special powers of The Heart, The Focus, and The Power into a magical force powerful enough to save the Realm from destruction.

Their initial efforts in the use of the powers as a team fail spectacularly until they begin to bond and learn to trust each other. After their training session with the Gargoyles, they return to the Castle of the Light and continue to practice on their own, learning valuable lessons about when to fight and when to talk. During a serious battle with real combatants, they try their skills in a true battle situation. Though, they are elated with their success, they realize that the prophesy is changing and their very existence is threatened.

It is decided that for their protection and the preservation of the prophesy that the three must be kept apart so that all of them wouldn’t be killed or captured at the same time. The Realm becomes ever more dangerous as everybody against the prophesy escalates their efforts to capture or kill the bearers of prophesy, endangering everyone associated with the three girls.New dangers are discovered even in the human world and terrible decisions have to be made that effect the lives of Azeelia, Aurora, and Cellairia. Just how much of their personal lives must they forfeit for the prophesy? Can their hard-won sisterhood stay strong in face of the dangers?