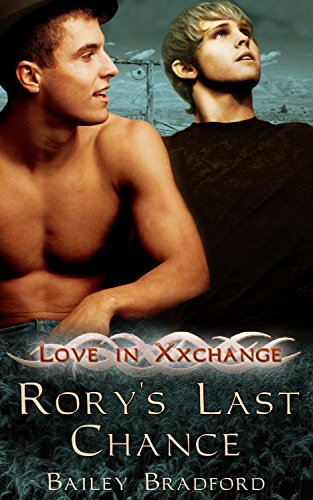 ‘The plot is smooth and has a good integration of secondary characters…I can’t wait to find out what happens between them in the upcoming story, Miles To Go…’ ~ Literary Nymphs Reviews

Book one in the Love in Xxchange series

Chance Galloway thinks walking into the Xxchange might just be the biggest mistake he’s ever made, but one stranger who seems to know just how to touch Chance is going to make it a night he’ll never forget.

Chance Galloway is used to being alone. Once a wild and voracious player, he became a loner after a traumatic event in his past tore his world apart. Older and wiser, years of loneliness and a moment of weakness drive him to seek another’s touch. The only problem is, the club he chooses to visit is filled with PYT’s—pretty young things Chance simply doesn’t find appealing.

Rory Calhoun has his own baggage that haunts him. Still, he gives in to curiosity and decides to check out the local club. Inside he spots a man who fires up every fantasy Rory’s ever had. The only problem is, despite a quick, enthralling encounter, the stranger makes it clear he isn’t interested in PYT’s, a label Rory knows would be slapped on him in a heartbeat if the stranger ever saw his face.

Rory has one unexpected opportunity to make Chance see him as a man, and he’s going to grab that opportunity, and Chance with both hands.