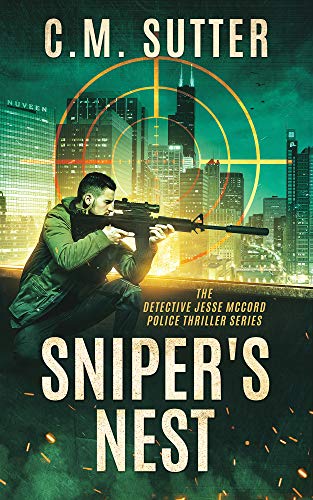 The ambush is in place, he takes aim, and shots ring out. Chicago is officially on notice, and a siege is underway on the city’s men and women in blue.
Assigned to the task force investigating the shootings, Jesse McCord and twenty of Chicago’s top-notch detectives work day and night to track down the sniper whose agenda is apparent—to kill as many police officers as possible.
Getting in front of the crazed assailant is the only way to stop him, but without a name, a face, or a witness to the shootings, the police department is chasing a ghost.
As a profile evolves, Jesse is struck by the realization that he and the sniper have much more in common than anyone could have known. It’s the epiphany he needs to stop the shooter, and a dangerous game of cat and mouse begins. Taking on the killer face-to-face, and single-handedly, is the only way Jesse can protect his colleagues and end the siege on his beloved Chicago—the city he calls home and always will.

“Few criminals know how to terrorize a city quite like a sniper on the loose, and C. M. Sutter kicks off her new Detective Jesse McCord Police Thriller series with a sniper who’s targeting Chicago’s police and emergency services. The likable McCord, whom Sutter fans will recognize from an earlier book, is a particularly daring leader in the hunt for the killer, and the tension ramps up steadily as the book approaches its chilling conclusion.” Angela M., Line Editor, Red Adept Editing