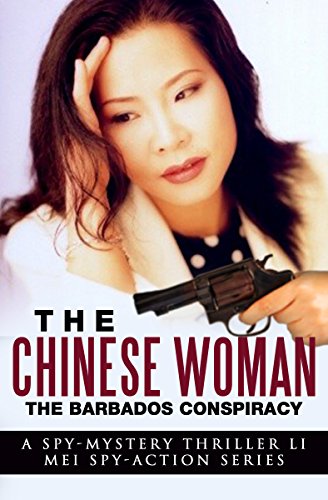 This gripping spy-thriller combines the excitement and suspense of Ian Fleming with the reality of John LeCarre. The author is a former federal criminal investigator and intelligence officer and he uses his background knowledge to bring the characters to life. A poor shopkeeper and his wife in Shanghai are murdered, something these Triad killers have done many time before, but this time they made a mistake…the victims’ young daughter was watching. Not finding the daughter was not just a mistake, it was a huge mistake. Many years later in Seattle, FBI Special Agent, Sean McNamara, is in a tai chi class and he finds himself attracted to a beautiful Chinese woman in the class. She seems to be just a PhD student at the University of Washington, but dead bodies seem to crop up when she is around, including a serial killer who is the subject of a police manhunt. A few months later, on the Caribbean island of Barbados, during a hunt for a killer, Special Agent McNamara and the Chinese woman encounter a conspiracy that reaches into the CIA and the halls of Congress and they become the hunted as assassins arrive on the island. This is the first novel in “The Chinese Woman” spy-suspense-thriller series. The second novel, “The Chinese Woman: Operation Lion Den” is currently available free at http://eepurl.com/duPvHD
To see all the novels in the series, with descriptions, go to: https://www.bcoxbooks.com
INTERVIEW WITH THE AUTHOR
Q. WHAT MAKES THE “CHINESE WOMAN” SPY-SUSPENSE-THRILLER SERIES SO SPECIAL. WHAT DIFFERENTIATES THEM FROM OTHER NOVELS OF A SIMILAR GENRE?
A. To answer that, perhaps I should tell you what motivated me to write them in the first place. I love novels of this genre, and some include both talented writing and great story lines. What bothered me, however, is that most authors don’t understand how law enforcement and intelligence agencies actually operate making good stories unrealistic. Most readers may not be bothered by this, or even realize it, but it bothered me so I decided to write novels that rectified that problem.
Q. HOW COULD YOU RECTIFY THIS; WHAT IS YOUR BACKGROUND?
A. I have been very fortunate…for most of my career in the Royal Canadian Mounted Police I was assigned to the Major Crime Section, Commander of the Heroin Importing and Trafficking Unit, and an intelligence officer in the National Crime Intelligence Section (organized crime and terrorism). I got to learn about similar assignments in the US as I often worked with US police and the FBI. One of my best friends, in fact, was a CIA case officer.
Q. SO WHY DID YOU CHOOSE TO MAKE A CHINESE WOMAN THE MAIN CHARACTER OF THE SERIES?
A. After I retired from the RCMP and worked at a police college they wanted someone to go to China to study Chinese police training. I volunteered as my wife had recently passed away…I had to stop grieving and get on with my life. What an eye-opener that was…but that is a story for another time. I was treated like royalty at the police colleges and universities and made many friends among the police. I also made a few friends in the Ministry of State Security. Even though Americans and Canadians generally have a negative view of the Chinese, I was surprised to find that the Chinese actually like us; I never heard a single negative comment about Americans or Canadians.
Sorry if I am getting off topic. Since I have always wanted to be a writer, I thought, what a great advantage I have had. I am personally familiar with crime, law enforcement and intelligence work in North America, now I have a good understanding of the same in China. I could write an authentic novel in the mystery, suspense, thriller genre completely devoid of unrealistic nonsense.
You can see photos of me at a Chinese police college on my website: https://www.bcoxbooks.com