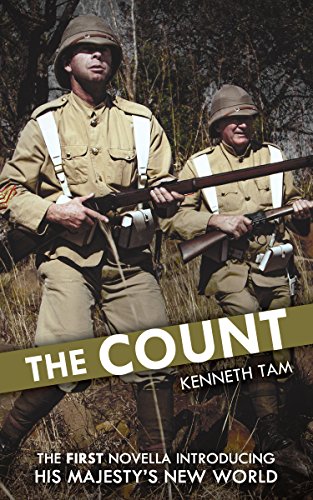 In 1881, explorers in the Rocky Mountains discovered gateways to another planet. Britain and the United States quickly partnered to colonize and exploit this rich new world.

Now it’s 1896, and the promise of a new beginning has drawn ex-Sergeant Edwin Barnes, his wife Evangeline, and a group of former British colonial soldiers to the new world. Having faced the Zulu, the Ashanti, and the Boers, this outfit is well-equipped to provide security for one of the many exploration companies seeking riches on the unknown planet.

But work is scarce; with the wild west becoming civilized, American gunhands have swarmed the new world, promising protection at low cost. As Barnes and his wife lose yet another contract, the prospects for the veterans and their families seem grim. Then, almost too conveniently, an aristocrat arrives in New World City. Could a German Count be the answer to the outfit’s problems… or is his agenda more dangerous than anyone can imagine?

This novella introduces the His Majesty’s New World series, which commences with ‘The Grasslands’. For more, visit newworldempire.com.