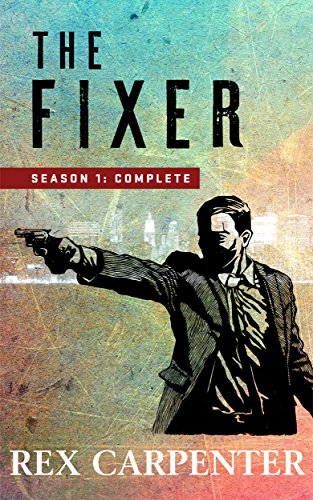 Contracted for a high-profile assassination…
Now double-crossed and on the run.
Can JC Bannister make it out alive?
Or will the Secret Service and the FBI get their man?

JC Bannister is a killer. He’s killed for his country, he’s killed for money. But now he’s being asked to cross lines he never imagined – killing a friend, a powerful US Senator, for money. A lot of money.

Before he can fulfill the contract his way, Bannister and his team are double-crossed and forced run. JC needs to figure out what the right thing is and get it done.
If he gets it wrong, he and his team could wind up in jail permanently or cut down by their unseen enemy.

Branded as traitors and pursued by the FBI, the Secret Service and virtually every law enforcement agency in the United States of America.

The Fixer, Season 1: Complete is the explosive first book in the JC Bannister Action Thriller series.

If you like page-turning, unputdownable action thrillers, crime thrillers or political thrillers with lots of twists and turns and a bit of humor, you’re going to love this series of books. Hitman for hire, assassination, vengeance – it’s all in there and waiting for you.

The Fixer series is currently six books deep (eight including The Fixer Origins series).
2019 will bring Books 7 and 8 at least, along with Joan’s first standalone non-origin book.