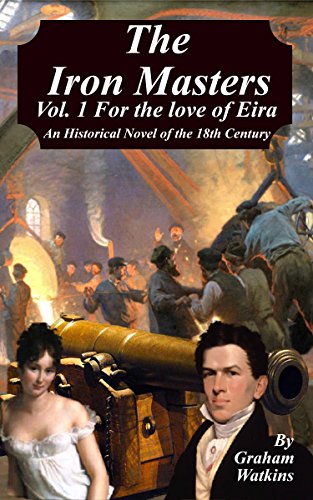 In the 18th Century five men created the biggest industrial city, civilisation had ever seen. They were the Iron Masters, masters of metal and men. Their cannons saved a kingdom, forged the greatest empire in the world and changed the history of the human race. Intrigue, bribery, adultery and murder were common in Merthyr Tydfil, a town where the furnaces burned day and night, the sun seldom pierced the soot filled sky and the Iron Masters ruled without pity.

Nye Vaughn, a humble farm boy, walked to Merthyr to find his destiny, unaware that a war was coming which would engulf the known world and make bold men rich. To fight Bonaparte, Britain needed cannons, thousands of them. Vaughn built the largest foundry of them all and made his fortune but, when the world changed, the iron behemoth he constructed turned on him.

Graham Watkins joins the ranks of historical authors as he weaves fiction and fact together with a pace that makes the reader turn the pages. The Iron Masters is a story of family, greed, betrayal and war. It’s scope is epic from Wales, to Baltimore, from the age of sail to steam railways, from the Battle of Trafalgar to the defiant raising of the American flag over Fort McHenry, signalling the confidence of a new, powerful nation. Many of the characters and events are true and reveal an amazing time in our history.
The Historical Novel Society’s reviewer said this about the book, ‘I found it refreshing to read a story with a difference. Yes, this had the great names we are familiar with: Bonaparte, Nelson, and the like, but how often do we, as readers of historical fiction, stop to think about the important things behind the wars of the past? The things like the ships and the great guns aboard them?
In the industrial age of the eighteenth century the Welsh town of Merthyr Tydfil has its furnaces constantly burning. Nye Vaughn is an ordinary farm boy in search of a fruitful destiny, unknowing that it is to be shaped by a bitter war with France. For Trafalgar, Waterloo and all the battles in-between, Britain needed cannon. Creating a dynasty and a fortune, he is to build the largest iron foundry of them all – but such monsters are often hard to keep under control.
The Iron Masters vividly portrays the age of the industrial era, when iron ruled as master. Watkins’ characters are, on the whole, well drawn. Their natures are often far from perfect which makes them real people, particularly in light of the effects of war and the greed and power it invokes.
The violence of war and the passion of sex is handled with dexterous subtlety by the author, and the plot rattles along at a good pace. There are a few scenes that are perhaps more ‘tell’ than ‘show’, but overall I found this a very good, entertaining and engrossing read.’
In his American book review, Alex Dunbar says, ‘The Iron Masters is an epic tale covering half a century as Nye Vaughn fights his way from humble beginnings to create one of the most powerful families in Wales.’

Above all, The Iron Masters is a book about extraordinary men and women and how they deal with life’s challenges. If you enjoy a classic novel, are interested in stories set in Georgian Britain when Wales was the British Empire’s armourer this is a book you will appreciate.
‘Volume 1 – For the Love of Eira’ deals with Nye Vaughn’s life from 1780 to 1786. It is the first book of five and the beginning of his adventure.