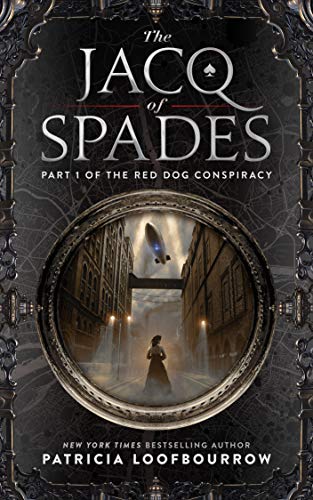 A boy vanishes. But not just any boy.

1899 years after the Catastrophe, Bridges is owned by the Mob. As the city’s steam-driven infrastructure fails, a new faction rises: the Red Dogs.

Jacqueline Spadros is haunted by her best friend Air’s death, killed as he tried to stop her sale to the Spadros crime syndicate ten years ago. Now in an unwilling marriage to the city’s biggest drug lord, she secretly runs a small-time private eye business to earn enough money to escape.

Air’s little brother disappears from his back porch. And now someone is following Jacqui.

The Jacq of Spades is the first chapter of the Red Dog Conspiracy steampunk crime family saga.

My vision for Red Dog Conspiracy is that there is a yet undiscovered gender-flipped detective noir miniseries set in a future world – a steampunk dystopia under a dome in the heart of the former US. This series tells that story.

Lovers of Downton Abbey, Game of Thrones, Bosch, or the Sherlock Holmes mysteries will enjoy this debut novel of the Red Dog Conspiracy series from “The Queen of Steampunk Noir” ….

What readers say about The Jacq of Spades:

“… a world of family intrigue combined with feuding households across the four quadrants of Bridges…” June Lorraine Roberts, Murder In Common

“This was the first steampunk book that I’ve read that I actually really loved.” Gabby’s Honest Book Reviews

“For rich pageantry and a complex culture navigated by a character who feels she’s balanced on the edge between the slums of the Pot and the extravagance of the families, The Jacq of Spades is a hands-down success.” Margaret Fisk, Tales To Tide You Over

“… good read for anyone who likes mystery and suspense mixed with science fiction.” The Beautyful Word

The Jacq of Spades is part 1 of a 13-part serial novel:

Warning: with child abduction, gangstalking, a corrupt government, domestic violence, suicide, and murder, The Jacq of Spades is not for the faint of heart.

Whether this is your cup of tea or not, you might like one of the Red Dog Conspiracy companion stories …

Scroll up, buy your copy, and begin the journey.

Welcome to the Family.