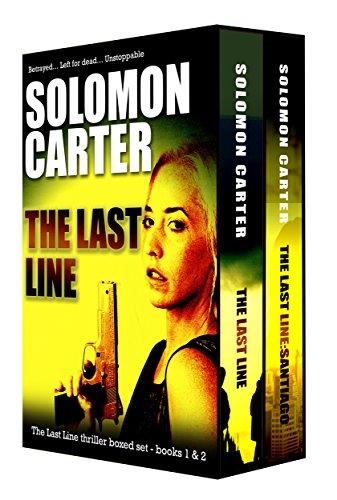 Could you make the choice?

Jenna Royal must make this choice.
To avenge the death of her murdered sister.
Or stand up and fight for freedom of the nation.

There is no time to do both.
She must choose…
Or we’ll all face the consequences.

A team must be built.
A force must be resisted.
The midnight hour is here….

Grab your copy of this top-rated thriller now!

Q. What kind of readers do you think like the Last Line series?
A. I think fans of Russell Blake’s Jet series, people who enjoy LT Ryan, Mark Dawson and Alan McDermott will love Jenna Royal and The Company. The Last Line is big-canvas, epic thriller series. It’s locked and fully loaded.
Q. How else would you describe the story?
A. It’s a high-speed roller coaster ride with action, twists and turns all the way to the end. People who love heart-pumping, page turning thrillers, will love this series.
Q. Why did you write the Last Line?
A. I got to know the characters really well before I wrote this series. In the end Jenny Royal had to be written. She is probably the baddest, toughest female heroine out of all my books. Her character comes from a pure need for revenge. But she’s a real kind of woman. She has emotions, romantic leanings, and a ten tons of responsibility on her shoulders.
Q. Sounds great! Solomon, you’ve written five Last Line adventures. Have you got plans for any more?
A. The Last Line was inspired by international events unfolding around the world during the writing process. There is always ‘bad stuff’ happening in the world. That sounds stupidly simplistic, but it’s true. The stories of the Last Line are about last resort solutions to nightmare scenario problems in a very dangerous world. Those problems could happen. There is actually plenty of inspiration out there right now. I think we could all do with Jenna and The Company getting to work right away!
Q. How would you categorise this series?
A. With my librarian’s hat on? I’d have to say The Last Line is an action thriller series, it has a female protagonist, in fact it has two female lead characters, with at least two strong male characters alongside them. It’s a conspiracy thriller series, it’s a mystery thriller series, it’s an International crime thriller series. Oh, and did I mention action and adventure? It’s got all that and more.
Q. That’s a pretty comprehensive answer!
A. I always aim to please.