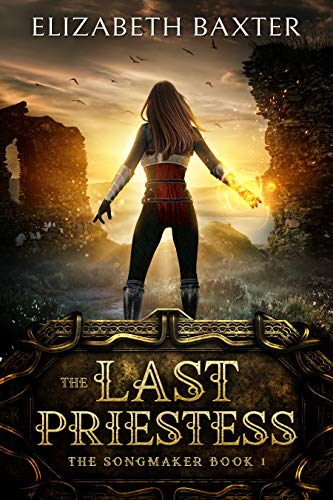 Two unlikely heroes. One chance to save humanity. They’ll take those odds.

In a land ravaged by civil war mages battle for supremacy whilst warlords rule the remnants of a broken population. And, sensing weakness, dark forces gather beyond the Veil, ready to punch a hole into this reality…Into this arena step two reluctant saviors.

Maegwin, a tormented priestess, is the last of her kind. The sole survivor of a murderous attack on her temple, she knows her goddess would preach forgiveness for her enemies. But Maegwin dreams only of revenge.

Rovann, a loyal mage, bows under the weight of expectation. As King’s Mage, the people look to him for leadership. But after the death of his wife, he dreams only of following her into oblivion.

Somehow these two damaged souls must learn to trust each other, for only united will they have the power to face the ancient evil that is stirring. But that’s easier said than done.

Because the Songmaker is waiting and if they falter, he will crush them utterly.

This box set contains all three books of The Songmaker series: The Last Priestess, the King’s Mage and The Traitor’s Song. It is a fantasy series in the spirit of epics such as A Song of Ice and Fire and The Wheel of Time. Step into a world of warring mages, fantastical creatures, and heroes who have the courage to stand against the darkness.

If you love Game of Thrones, The Wheel of Time or The Sword of Truth, you’ll love this epic tale of darkness and redemption.