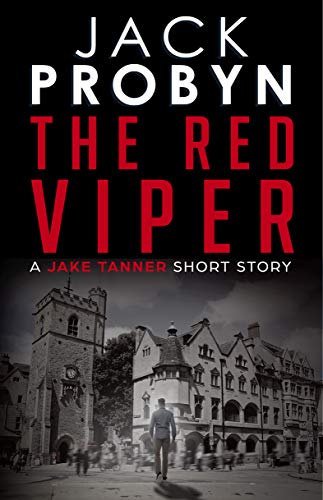 Jake Tanner’s an everyday man — you wouldn’t pick him out of a crowd. And when a routine bank visit turns sour, Jake finds himself in the midst of an armed bank robbery.

The criminals — The Crimsons. Notorious. Infamous. And yet to pull the trigger on anyone. But that doesn’t mean they won’t.

In this fight or flight situation, Jake must protect his girlfriend, Elizabeth — and himself — from harm at all costs.

Will The Crimsons succeed, or will Jake stand in their way? Are they about to spend their first ever bullet in Jake’s skull?

The Red Viper is the exciting introduction into the Jake Tanner series. Meet Jake today before everyone else does.

Also included: the first chapter of the Jake Tanner novella, AN UNLIKELY BETRAYAL.

Want to try before you buy? Want to get to know the real Jake Tanner – the man behind the badge – beforehand? Then you can download an exclusive character sheet that lets you behind the scenes into his life – some stuff won’t appear in the books! All you have to do is visit www.jackprobynbooks.com and it’ll be sent straight to your inbox.

For the same price as a coffee, you can enjoy my terror thrillers that’ll keep you on the edge of your seat throughout. Afterwards, you won’t be able to see anything the same ever again.

What more could you want? Plus, it’ll last longer than a cup of coffee.

Interview with the author, Jack Probyn
Q – Can Jake Tanner be compared to any other crime thriller heroes out there?
A – You know, I wouldn’t say Jake Tanner is like any of the other crime thriller heroes currently out there. He’s not like the Jack Reachers’ or the Alex Cross’ of these worlds. Sure, he has some similar characteristics, but Jake Tanner is very unique. Jake is a very heavily family-centered man. Anything and everything he does is done for them. But this does, in no way, mean that he is like Alex Cross who, readers familiar with James Patterson’s star, will know is a lean, mean, fighting machine. Instead, Jake Tanner is simply an everyday man. The one you see on the train to and from work everyday. That’s what makes Detective Jake Tanner different.

Q – What makes the Detective Jake Tanner series special?
A – A mix of things. I wanted something that would “Wow!” readers, something that is going to make them think, “What if that ever happened to me?” And so I mirrored the Jake Tanner series on something I would like to read myself. The Jake Tanner terror thriller series has a bit of everything. But all of them feature the big question: “What if…” And, once you’ve read them, you’ll never feel the same way about certain things again.