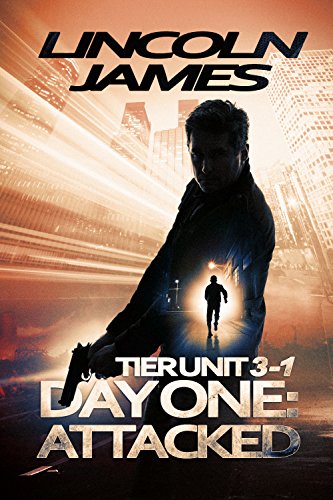 A terror cell spread far and wide … a series of random targets … five days to take them down.

Lincoln James’s debut work is described by ReadersFavorite.com as “fast-paced and action-packed … Jack Miller is worth watching in this continuing series.” Get in early to read this thrilling new voice in the action thriller genre!

But as Jack’s elite squad battles to hunt the people responsible, a man of great intelligence – driven by a hatred not even he can control – prepares his soldiers for war.

TIER Unit 3-1sees Jack Miller attempt to first win over his team and his superiors, then bring in a terrorist mastermind whose endgame cannot yet be seen.

Day One: Attacked is the first in a series of five novellas pursuing this story over the course of a thrilling 5-book action-adventure series. While this book is free to all, each subsequent installment is priced $1.49US / $1.99CA / £1.19GBP. OR:

Save up to a third off the individual prices with a value box set also available. $3.99US / $4.99 CA / £2.99GBP for all five books (territorial pricing outside the US and UK may vary).

Look up Lincoln James or code B071D326H3 in the Amazon search bar.

A: The idea is to structure the adventure like a TV series. Five books laid out in which each “episode” sees a different objective within a bigger whole. Inspired by shows like Quantico, 24, Homeland.

Q: So it’s not like a series of cliffhangers?

A: Not like a guy with a gun to his head or falling out of a helicopter, then “duh-duh-duuuuh!” Fade to black. No. The days are complete, but the ultimate goal in the story – to catch the terrorist mastermind – is not resolved until the fifth and final book.

Q: And they’re all shorter than most novels?

A: Each day is about half the length of a regular novel, although many authors are writing shorter works these days. When a story doesn’t need to be 100,000 words, why not write it in 30-40,000? You see this with James Patterson and his “Bookshots” range, which are shorter, incredibly fast-paced novellas. That’s the kind of pace and tone I’m aiming for with the TIER Unit books.

Q: The story goes big. Do some say too big?

A: Early readers have suggested it goes quite bananas. It’s elevated reality, not a gritty treatise on the War on Terror. I even invent certain facilities such as those used by the FBI or the Air Force. If you want reality, there are plenty of books for that; if you want entertainment, try the TIER Unit series.