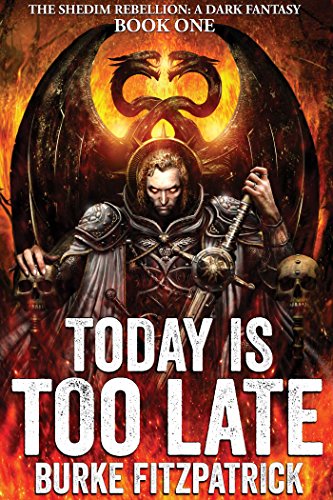 A reluctant villain starts a rebellion.

Dark armies burn the greatest city in the world. A girl is born who might end their dominion, but only if a fearsome warrior protects her from the demons of the Nine Hells. The demons are poised to win a long war, until a rebellion begins in their ranks.

An infamous warlord, Tyrus of Kelnor, helped demons conquer a continent, but the birth of a princess tests his loyalties. The child is marked for death, and her fate is in his hands. Old memories haunt him, from before the sorcery and monsters, when honor and service had value. Torn between the empress he loves and the emperor he serves, he battles an empire he helped build. A new war begins while the flames of the old war still burn.

TODAY IS TOO LATE is the first book in the series, The Shedim Rebellion, from author Burke Fitzpatrick. Filled with demonic sorcery, brutal battles, and monstrous beasts of war, The Shedim Rebellion, reinvents errant knights and dark sorcerers but also asks serious questions about the seduction of evil and the struggle for redemption.