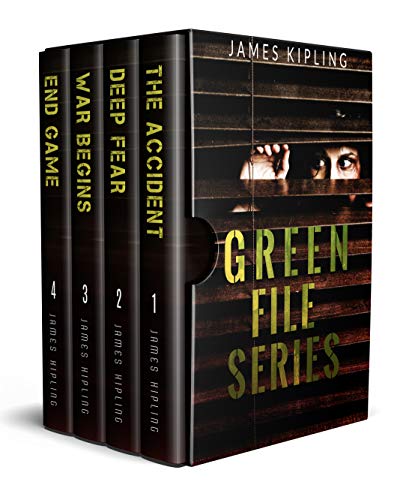 ***A gripping collection of thriller new releases 2019 including some of James Kipling’s best political thrillers.***

This amazing value box set is brought to you by your favorite author as an exciting read that will keep you guessing as to who to trust. You will love this awesome collection because the stories are written by a bestselling author with you in mind.

An incredible collection of Christian mystery and suspense in Kindle Unlimited novels that will keep you on the edge of your seat the whole time.

You will not want to put this set down as you read beautifully written compelling novels with fast-paced action and intriguing characters. All 4 stories are bound to delight.

The books in this set:

After the mysterious death of her husband, Jessica Mayes is suddenly thrown into a strange and dangerous nightmare.

The CIA suspects she has a computer virus that can alter the face of global politics, and create a single world power.

Jessica gets entangled in a power struggle involving the President, the CIA, a ruthless woman, and the President’s son. She is branded as the most dangerous woman on the face of the planet.

Forced to run for her life, Jessica has no other choice but to fight…or die.

The CIA has marked Jessica Mayes as the most wanted woman alive.

She is accused of attempting a terrorist attack on American soil.

She is desperate to find a secret journal her late husband left behind; a journal that contains instructions to unleash a computer virus that can defeat her enemies.

Jessica is being hunted down by Roger Alden, a ruthless CIA Director, along with other foes who want her dead.

Jessica Mayes is wanted for high treason, a trap created by Roger Alden, the Director of CIA.

However, the carefully created plans of Roger Alden soon fall apart when the protestors he hired to cripple America turn against him and burn down the White House.

With America turning into a sinking ship, Roger’s allies turn against him, while President Green is forced to make a dangerous deal with the Russians.

During it all, Jessica Mayes is still on the run, determined to win the war by locating the Artificial Intelligence virus her dead husband created.

All enemies of Jessica Mayes ultimately meet their final end.

She has three days to reach President Green with her late husband’s creation, the AI virus, to prevent China from launching a nuclear strike against America.

With the electrical grid and various systems down, placing America in chaos, she sets out on one last dangerous journey.

Can she reach the President before it is too late?

“Very suspenseful! These books move along at a fast pace with many twists and turns. Jessica Mayes is smart and a warrior.” ~ Kindle Customer

“The settings are engaging, the characters intriguing and the pace is fast. If you like stories with strong female protagonists, then this is a great series.” Kindle Customer

***Scroll up and grab your copy now for FREE with Kindle Unlimited.***