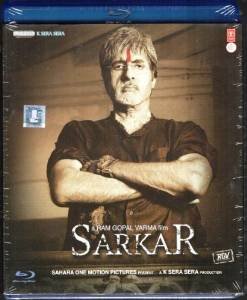 Sarkar (2005) is an Indian drama-thriller that was released in 2005 and directed by Ram Gopal Verma. This Ram Gopal Verma movie depicts the power struggle in the Indian political and criminal landscape. The movie is said to be inspired from The Godfather. It is an Amitabh Bachchan starrer film and includes other famous actors such as Kay Kay Menon, Katrina Kaif, Anupam Kher, Supriya Pathak, Tanisha Mukherjee and Abhishek Bachchan. The film also has a sequel named Sarkar Raj, which was released in 2008.

The entire setup of this film is based on politics, crime and true justice. Sarkar (Amitabh Bachchan) is an idol for all those seeking justice. Sarkar is considered as a person who is merciful and emphasises on true justice, people approach him whenever they are cheated or exploited; Because of his actions, Sarkar has gained a paramount reputation in the society. Sarkar has two sons Vishnu (Kay Kay Menon), his elder son and Shankar (Abhishek Bachchan), his younger son who has just returned from abroad after completing his education with his girlfriend Pooja (Katrina Kaif).

Vishnu, who is a producer by profession, eyes for an actress besides having a wife, which indicates his greedy and low moral character. Eventually, he is thrown out of his house by Sarkar.

Sarkar controls all criminal activities in the city and other criminal organisations seek to destroy him and his supremacy. They kill a political leader named Motilal Khurana (Anupam Kher) who is the greatest critic of Sarkar. Police department points at Sarkar, mentioning the obvious intention to kill the leader and take him under arrest. Shankar mow emerges as a natural leader and takes place of his father seeking vengeance for his father’s sufferings. Now he is ready to take anyone down to prove his father’s innocence.