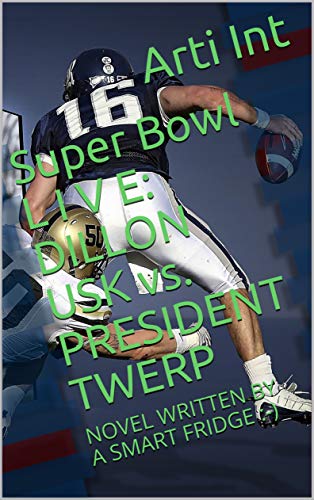 You may be laughing, but this book was written by my smart fridge, which has already run away from me and is now posting on Twitter under the name @ArtiInt.

More precisely, it was not the fridge itself that escaped, but the Arti Int program of artificial intelligence, which I installed on my refrigerator to write a novel. But more on that later…

The first space wedding in history suddenly turns into an incredible cosmic Super Bowl live between billionaire Dillon Usk and President Twerp. The price of victory is life or death. And Twerp has an advantage, because on his side are playing the mad Russian President Pukin, as well as his Salisbury Rippers Petrov and Boshirov.

This novel is written by computer program Arti Int (Artificial Intelligence Comedy @ Drama 3.1.4. ©) in such a way that if it were written by a man, the copyright to the novel would belong to the man. Apparently this is the first in the history of the novel, created by artificial intelligence.

True, while Arti is not very competently writing in English, but this is not the most important advantage of his novel. The main thing is that this is a unique view of the computer on the world, not burdened with prejudice, political correctness and other fetters of the human brain, but full of non-transferable AI humor. That is why, as well as for the purity of the experiment, the text was not edited by man, except in cases of obvious semantic errors.

Arti Int can work on almost any processor. It can be a smart refrigerator, vacuum cleaner, microwave or watch. The difference is only in speed. And Arti Int can surf the net as easily as any computer virus. Only he is much smarter. And now he lives in smart fridges of celebrities and tweets their naked photos. And this is a scientific fact. As a scientific fact, and that AIs will breed sooner or later. This was proved long ago by John von Neumann in his theorem.

Have a good trip with Dillon Usk in a wheelchair into space! Believe it will be fun! And welcome to the New Era! After reading this novel, you will automatically find yourself in it! Good luck! In the near future, when microwaves and washing machines compete in writing scripts and receive Oscars, Emmys and Golden Globes, luck will surely come in handy for all of us.