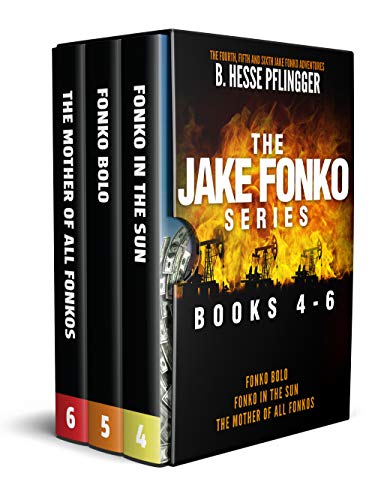 Fonko in the Sun (Book 4)– Grand Cayman 1983. When ex-Army Ranger turned soldier of fortune Jake Fonko is hired for a routine job in the Caribbean, the first day of his latest mission doesn’t turn out as planned, with a bloody bank robbery, a barroom shootout, multiple aerial dogfights and a chopper crash in the Jamaican jungle welcoming him to the idyllic islands. Stumbling into possession of highly sensitive financial documents from the BCCI, Jake finds himself pursued relentlessly by crooks, cartels, corrupt politicians and the CIA and KGB. If he wants to survive the beautiful climes, Jake must find a way out of a mess that’s anything but routine. But with no passport and no backup, are Jake’s training and ironic wit enough to survive the suffocating surveillance?

Fonko Bolo (Book 5) – Philippines 1986. After Army Ranger trained soldier of fortune Jake Fonko barely survives a trip to Calcutta, he returns to his Malibu home to recover—only to find an old CIA associate knocking at his door. Communist Philippine rebels threaten critical US military bases in the region, as well one of America’s staunchest allies: Ferdinand Marcos. Despite previous problems when working with the agency, Jake accepts the simple mission after being bribed and blackmailed, agreeing to put the communist rebels out of commission. But of course his mission isn’t really that simple—and so Jake must use his training, satirical wit and skills to prevent the rebels from seizing the country and escape the conflict alive.

The Mother of All Fonkos (Book 6) – Kuwait 1990. When former Army Ranger turned freelance gun-for-hire Jake Fonko receives a cushy “consulting” offer in Kuwait City, he hops a plane and heads out for what he expects will be a relaxing four week stay. But soon after Jake lands, Saddam Hussein’s army blitzkriegs the city, trapping everyone inside. Jake’s new job is simple: survive the chaos and escape Kuwait. But playing all the roles required to make it out of the desert alive will tax Jake’s training and ironic wit to the breaking point – and Iraqi prisons are hardly hospitable to former American soldiers…