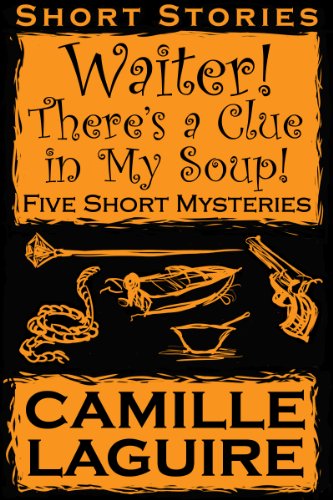 In the title story, “Waiter, There’s a Clue in My Soup!” two police detectives sort out a poisoning case over lunch at the deli, with a little help from a foodie in the corner. (This story was nominated for a Derringer award in 2003.)

“The Hoosegow Strangler” was the first story featuring Mick and Casey, a pair of young gunslingers turned detective. In this locked room story, a witness they were guarding is murdered, and they have to solve the crime to preserve their reputation.

“Trail of the Lonesome Stickpin” finds Mick drugged by a pair of pretty femmes fatales, and he has to figure out what happened before Casey shoots him. (This story was put forward for an Edgar by its publisher.)

In the fourth story, a killer believes that all he needs is a strong “Alibi” to pull off the perfect crime, but he finds that works against him.

In the final story, “The Promise,” a teenaged girl has to keep her brutal father from turning her brother into a killer. (This story was also nominated for a Derringer in 2007.)

(This collection is 16,000 words long, or equivalent to about 60 pages of a mass market paperback.)