Home
>
All Free Stuff
>
Free Books
>
When the Wood Is Dry – I. Call of the Innocent: An Edgy Catholic Thriller
Please Share 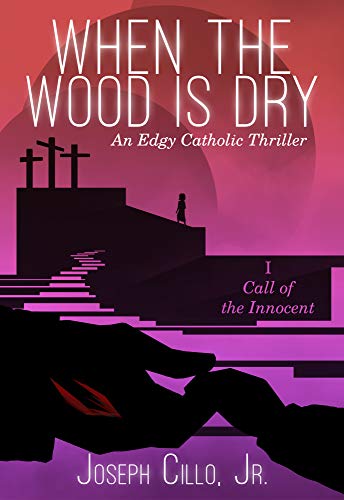 “Sometimes we must suffer if we are to save souls.”

Lali wakes and asks, “Why that dream again?”

Haunted by her ominous dream, Lali prays the rosary at an abortion clinic, as she would on any other day.  Glancing up, a distraught, pregnant drug-addict approaches the clinic. Lali counsels the girl against having an abortion and walks her home where she meets the girl’s boyfriend, a notorious gang leader.  Ralo glares at her, as sharpens his machete.

“Go away, little girl, this is no’ ju beesness.”

When the Wood Is Dry will be published in three parts: I. Call of the Innocent; II. Crucifixion, and III. Resurrection.  Read this first part for FREE.

What are people saying about When the Wood Is Dry: An Edgy Catholic Thriller?

“The storyline is like nothing I’ve ever read before. “

“…a chilling, unpredictable, fascinating story which I couldn’t put down.”

“…a well thought out, complex story with strong, diverse characters and a unique concept. The story was easy to read and follow. Full of twists and turns, action and heart-wrenching moments.”

If you go to Mass Sunday morning and watch Game of Thrones Sunday evening, you won’t want to miss this Edgy Catholic Thriller.

Read Part I: Call of the Innocent for FREE, Today!

Or, read the full book in paperback at:

As the subtitle, An Edgy Catholic Thriller suggests, When the Wood Is Dry is Edgy – Intended only for mature audiences, Catholic – includes overtly Catholic religious imagery and perspectives, and Thrilling– “full of twists and turns, action and heart-wrenching moments,” as one reader commented.

Please note:  When the Wood Is Dry: An Edgy Catholic Thriller is and edgy story dealing with mature subject matter including unplanned pregnancy, profanity, and violence. Reader discretion is advised.

Q1. Why do you call When the Wood Is Dry an Edgy Catholic Thriller?

When the Wood Is Dry is based loosely on accounts of Christian virgin martyrs like St. Maria Gorretti and St. Agnes.  The lead character is a committed Catholic who experiences visions that unite her sufferings with the sufferings of Christ.  The themes are very Catholic and the content is decidedly edgy.  By calling it an Edgy Catholic Thriller, we identify clearly that it is a Christian thriller, and what might be considered Catholic adult fiction.

Q2.  Would you consider When the Wood Is Dry as Women’s Fiction?

When the Wood Is Dry is Women’s Fiction in much the same way that Uncle Tom’s Cabin was Women’s Fiction, except that it was written by a man. While the content is thrilling, the focus is on the emotional journey of the characters, centered around an injustice that is accepted by society, and the victimization of someone standing against that injustice–a strong female lead thriller in which the main character is truly feminine and not strong by virtue of traits more typically considered masculine.  The book fits a lot of other categories like, a Christian Crime Drama, a Kidnapping Thriller, a Religious Thriller, etc., and can be enjoyed on that level, but points to much deeper truths.